or That of God 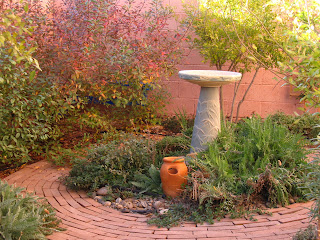 It is easy to be at peace when the world is still.  Easy, on a golden day in an unusually warm autumn, nestled into the shelter of the garden.  The leaves aren't particularly vivid this year, but their colors are warm—sienna and ocher, earth tones that soothe rather than dazzle.  Occasionally a leaf falls, riding a light current of air before landing, beached, among its drifted kin.  Sir Marley snuggles up to the west-facing garden wall.  Although the house shades the wall by mid-afternoon, it still breathes out a gentle warmth until dusk.  The cat's front paws curl underneath him; he blinks contentedly at nothing.  For some reason the way he looks off into the distance makes me think of a haiku, a poem whose simple words gesture toward something beyond them in the silence.


II.
The Quakers—or Friends, as they prefer to be called—cherish silence deeply.  In the Friends' view, it is by centering down into quietness, by listening for the still, small voice, that we become attuned to the ways of God.

I considered myself a Friend for several years, but lately I haven't been so sure.  I wonder whether my reticence isn't really a form of rebellion against silence in general.  I may have come to value the quietness that illness has forced upon me, but to seek out more of it when what I really crave is a little noise and bustle and excitement—at this point, it's not happening.  So these observations are not coming from someone for whom "way has opened" (as they—we?— say) into peace, or from a "weighty" Friend of measured wisdom and clarity of insight.  They're just things I'm pondering and offer in a spirit of sharing.

George Fox, the founder of the Religious Society of Friends, wrote to his followers from prison in 1656, encouraging them to "walk cheerfully over the world, answering that of God in everyone." Modern Friends still hold this saying dear, perhaps because it reaches out wide in an age when the world has grown small, when radically different cultures and beliefs bump shoulders in uneasy proximity.

At its simplest and broadest, perhaps, the phrase refers to the urge toward goodness, to those actions that partake of love or joy; peace, patience, kindness; gentleness; maturity.  To answer that of God in those around you—to respond to the goodness in them, to speak to what is admirable in them—is to base every action on kinship, on respect.  It is to be generous in giving the benefit of the doubt.

The point of listening in silence for the still, small voice that lies beyond you is to learn to recognize its sound, to know its distinctive timbre even in the midst of noise and activity; to hear the voice of God speaking through a person's life, even when that person differs from you.  Then one can answer in kind. 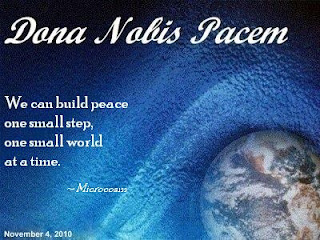 Today, November 4, 2010, marks the seventh BlogBlast for Peace from MimiWrites—a day when bloggers from around the world all post on the topic of peace. It comes hard on the heels of a more than ordinarily acrimonious election here in the USA, and as I write I find myself thinking less about peace between nations than about peace between neighbors—because frankly, peace among nations seems like the more accessible goal right now.  I have never seen people with so much in common so divided, so entrenched in fear and egotism (why do the two so often go together?), so eager to insult and smear and slam doors, so loathe to engage in discussion, so unwilling to bridge differences.

The BlogBlast's theme is "Dona nobis pacem"—grant us peace.  I can't say the words without also hearing the round we sang many years ago in high school choir.  I don't normally wax rhapsodic about high school, but experience has taught me what an extraordinary ensemble that choir really was.  Our director had a gift for awakening talent and enthusiasm and for bringing out his singers' best efforts, but he especially had a gift for uniting us that I didn't realize was rare at the time.  While I can remember some petty squabbles and hurt feelings and teenage angst behind the scenes, I don't recall any of the poison and backbiting and spite that can often destroy a group from within.  All of that was checked at the choir room door, because once we started rehearsal, we were there to make music.  Our director filled us with that vision.  He showed us something beyond ourselves.  He taught us to listen to one another for balance and blend, to watch each other's breathing, to pool our resources in a common endeavor.  We respected the different gifts we each brought to the table.

Our worlds were noisy, full of internal and external commotion, with big and little egos, rank immaturity, raging hormones, and problems of all kinds that loomed over our inexperienced heads.  Yet when we sang "Dona nobis pacem" and our words asked for peace, all along we were engaged in the process of making peace.  We looked beyond ourselves, we listened to each other, we worked together.  I can't help thinking now that what we really did was to answer to that of God in one another.

So yes, dona nobis pacem.  May we have peace, may we be given that grace from beyond us that somehow, miraculously, makes the unlikely all work out.  But in the meantime, let us go make peace, even amid the noise and clamor of a sound-byte world that pits neighbor against neighbor.

Walk cheerfully over the world, my friends, answering that of God in everyone.
Posted by Stacy at 4:39 PM

Stacy
Albuquerque, New Mexico, United States
I have an extra Adirondack chair, you know. Do have a seat. There's no better place for gazing at clouds, watching the grama grass grow, or enjoying the flowers. Or thinking. We can plot against the neighbor's cat. (Don't worry—it's plotting against us, too.)
If you'd like to contact me, you can reach me at stacy.microcosm@gmail.com.

Tips for Living with Chronic Illness