or Things to Remember

A lot can be forgotten in a year:  the names and terms of all the US presidents;* the capital of Mauritania;* what that one key in the utility drawer belongs to.  Some things are a relief to forget; some are more or less irrelevant (not meaning any offense, presidents and Mauritanians); some are kind of a nuisance (what does that key belong to?).  Some, though, end up being unexpected pleasures.  My favorite things to forget every year are the fall-blooming crocuses, because they have such charming ways of recalling themselves to your attention. 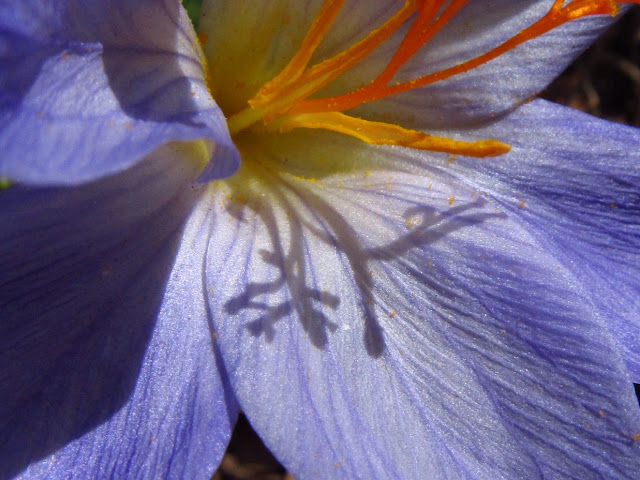 Well, really, just the one way.  They bloom.  But that's pretty charming.  It's a pity we can't do that ourselves when we need someone's attention—so much more appealing than "Ahem."

I've grown two kinds of FBC's before, Crocus speciosus and C. sativus.  C. sativus is the saffron crocus.  Its flowers aren't spectacular, really, but they're perfectly attractive, even more so since you can conjure up imaginary sauces while you look at them.  They have the pleasant habit of blooming in November, though they're fickle and may decide not to bloom at all.  They also have the unpleasant habit of sending up their leaves ahead of time and hanging on to them until April or later.  Six months of leaves outweigh the brief days of bloom, I find; since the sauces have so far all stayed imaginary, growing the flowers for a tiny amount of saffron doesn't seem all that exciting, either.  All the sativus I planted last fall, except for a few sly, eely ones that got away, were dug up in the spring.  They're hanging out in pots these days, putting up leaves, and later they will be whisked off into a corner with the black widows for the winter.

We're not talking about C. sativus, though.  They aren't much of a surprise, what with the leaves letting you know that they're coming and all.  The ones that do surprise me every year are the speciosus crocuses.  The flowers come out of nowhere, it seems, since the leaves don't appear until spring.  I returned from vacation a couple of weeks ago to find a small group basking merrily in the sunshine. 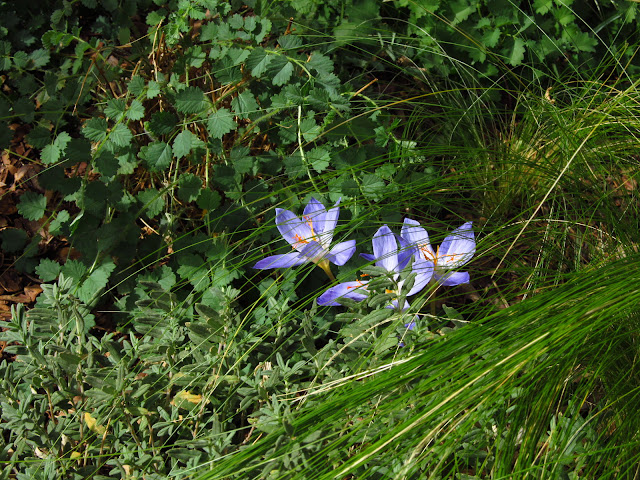 I wasn't even waiting for them this year, not even in some tucked-away, undusted little alcove of my brain; I really had forgotten all about them.  The crocuses are looking a little lost there among the greenery, but the flowers do seem to stand up better with other plants' support.  I'm not just saying that as gardener's "spin"—a white-washing way of not admitting that I had forgotten about them and planted other things in their spot.  I did forget about them.  Completely.  They're just better off that way.

Since then other crocuses in various small patches have been blooming, with one or two new flowers opening a day.  The fall-bloomers have an idiosyncratic character and appeal, separate from their beauty, blossoming as they do out of sync with the season and with the rest of their kind. They're like little floral post-it notes with reminders written all over them, and the reminders are all of pleasant things—starting with the fact of their own existence. 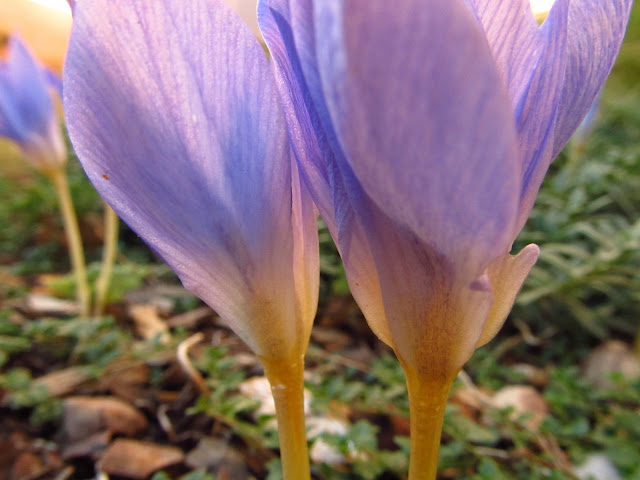 They also remind you of ephemerality—a little bit of a jolt, when autumn is only slowly moving along, and the other things still in flower are the kinds that bloom for months on end and still have weeks ahead of them (Go, 'Wild Thing' autumn sage!).  In their own gentle way the crocuses suggest that you might want to pay attention to each day's changes as the year wanes.

They remind you of the joys to be found in bulbs and corms, which is handy, since a box of 500 ipheion, scilla, muscari, and sundry just arrived on the doorstep, and someone is going to have to plant them.  How nice to have a little inspiration blooming at the same time.

They remind you that bees have favorites, too, and that all those blackfoot daisies and marigolds and the licorice mint and basil and sage are fine in their way, but crocus pollen is Something Else Entirely.

They remind you to keep an ear out for the sandhill cranes' return.   (Almost right on cue a creaky purr resounds, and you see outstretched wings glinting in the sun as a family of cranes rides the thermals down the Rio Grande valley.)

They remind you not to fuss too much about color combinations in your garden, because Mother Nature sure doesn't. 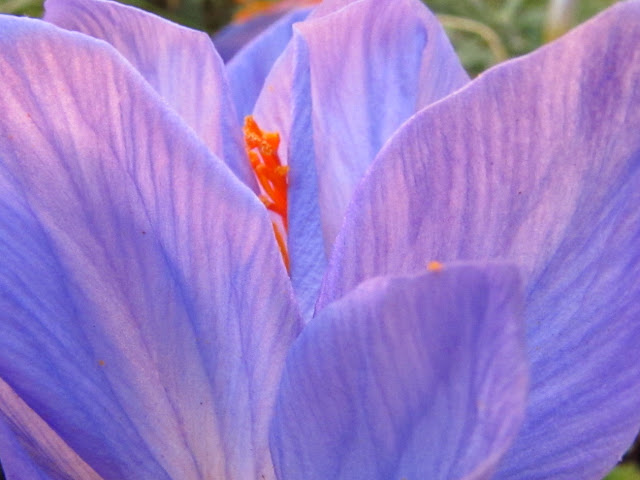 They remind you that short-term fragility and long-term toughness can go hand in hand.  The flowers will be gone in another few days.  I will forget about them soon after, and the bulbs won't get any water or fertilizer or special attention.

"The Clock Stopped Long Ago" 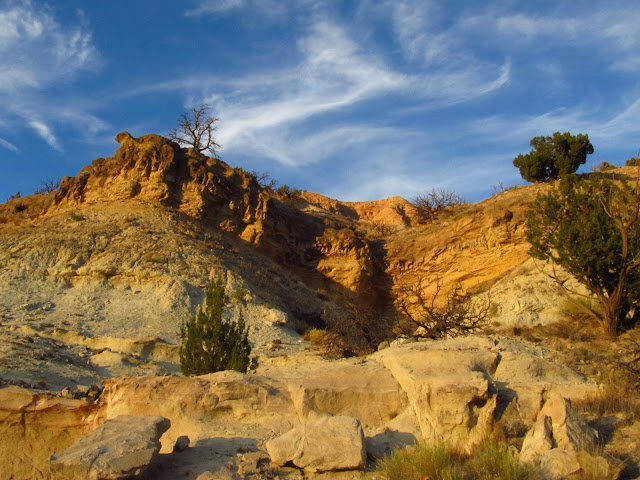 The sandstone glowed in late afternoon sun.  A raven called as it passed overhead, a deep, throaty croak that rang briefly before melting away.  Its wings beat with audible effort—not the quick flutter of the Oregon juncos and scrub jays darting between junipers, but a good, sturdy flap as it pulled against the air.  That, too, melted into nothing.

The afternoon leaned against a vast backdrop of silence.  Small sounds leapt out, like grasshoppers from a meadow, without disturbing the silence at all. 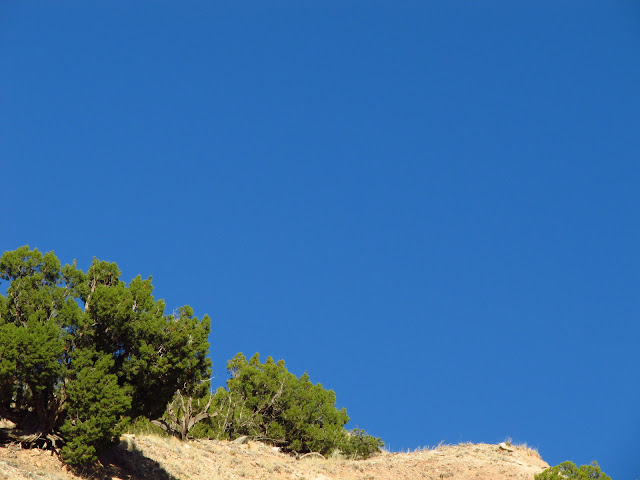 Away from Albuquerque's urban junkyard of a soundscape, on still days in the piñon and juniper deserts of the lower Sandias, white noise disappears.  Not just from cars and airplanes and swamp coolers and power tools, but from nature, too.  No constant, companionable sounds fill the space around you:  no mountain brooks gurgling and splashing, no clattering leaves in aspen trees or big-tooth maples, no grasses thick enough to rustle.  Silence surrounds you like sandstone, shaped only by the sweeping wind.  The coyotes, howling at sunset or in the chill dark before dawn, make little pinpricks of sound, like stars glimmering one at a time in the enormity of space.


I found myself pondering the middle layer of experience between the very small and the very large—the shady-tree-and-gurgling-brook level of experience—during a few days' stay at a casita in Sandia Park last week.  Ansel Adams said of New Mexico,


"It is all very beautiful and magical here, a quality which cannot be described.  You have to live it and breathe it, let the sun bake you into it.  The skies and the land are so enormous, and the details so precise and exquisite that wherever you go you are isolated in the world between the micro and the macro, where everything segues under you and over you and the clock stopped long ago."*

The micro and the macro.

To say that New Mexico is a place of extremes is certainly true, but maybe not quite enough.  It's more that the stuff that ordinarily lies between extremes, the broad stretch of middle ground where humans tend to look for ease and comfort, is absent.  I can think of many places of spectacular grandeur—the Colorado Rockies, the Grand Tetons, Idaho's Sawtooth Mountains—where you are dwarfed and awed by the magnificence around you.  You have companions in dwarfishness, though.  The forest trees may tower over you, the lakes may be deep and cold, the elk may bugle hauntingly out of a chilly late-summer night; but they are all still somehow on a human scale, comprehensible, embraceable.

Here, though, you feel like the odd one out.  You may be dwarfed by the whole of the landscape, but you are taller than most of the things that grow on it—when anything grows on it at all. 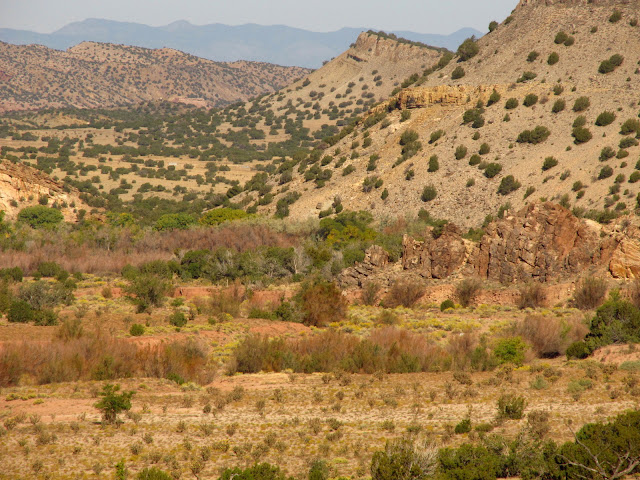 You are like Alice in Wonderland, if she'd been caught between the Eat Me and Drink Me phases, a little too large, or much too small for your surroundings.  You're isolated between the enormous 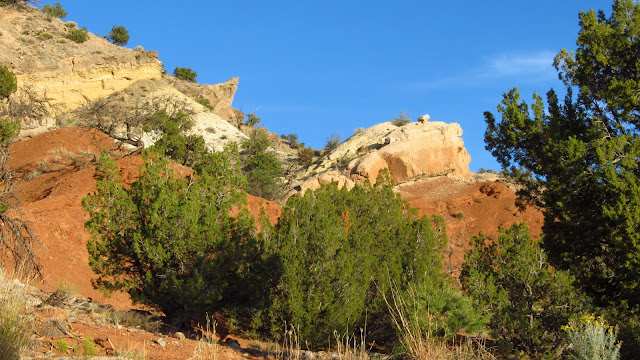 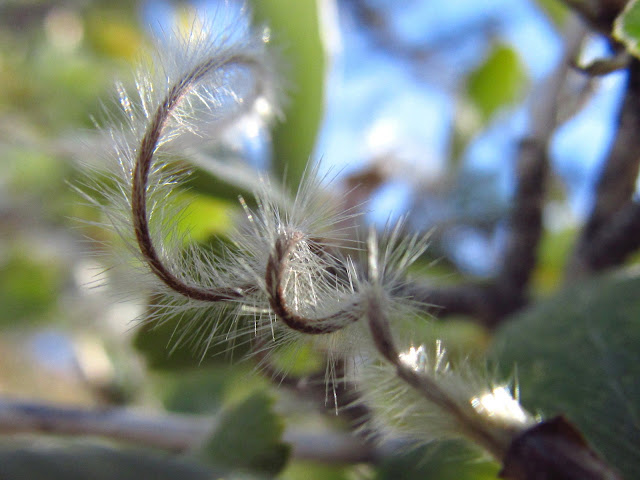 in awe of both, but not belonging to either.  You feel vulnerable 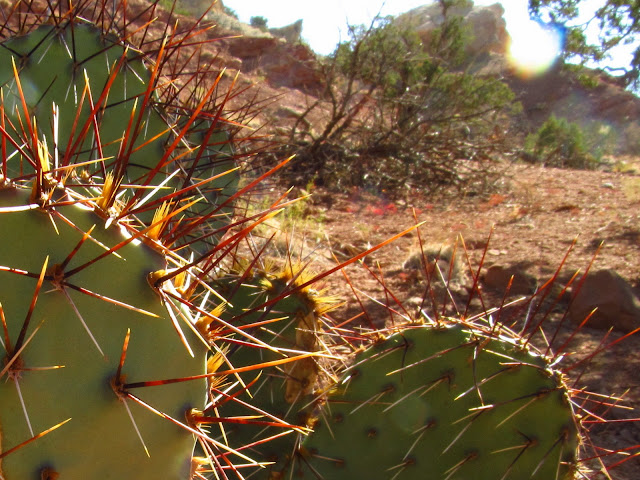 in an exhilarating way, 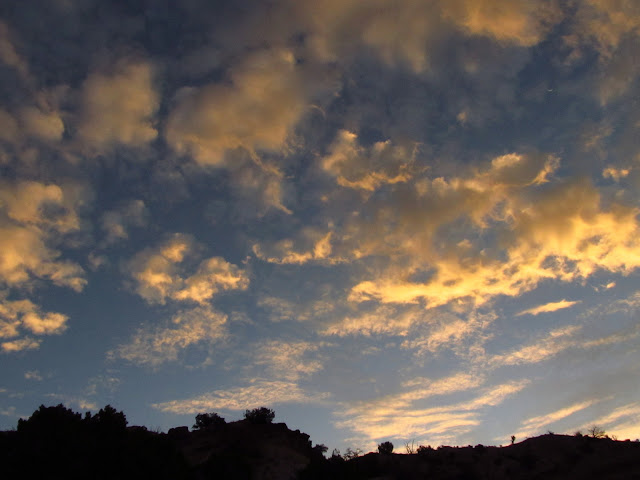 and after a long, glorious day of vulnerable exhilaration you are grateful to the junipers, with their soft, shaggy bark, 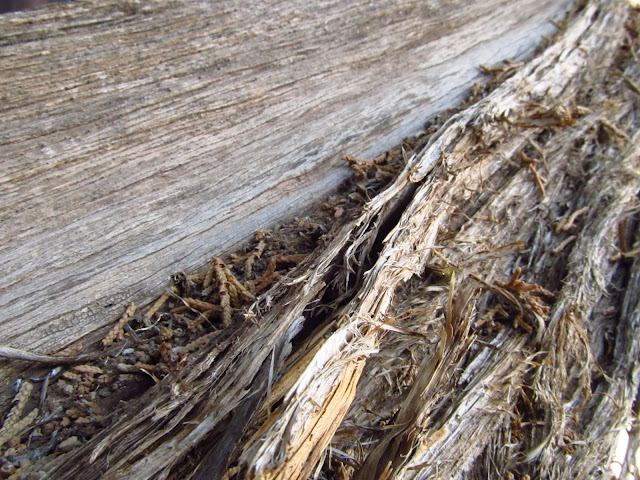 and to the piñons, with their fair to middling size, for bringing things back (somewhat) to scale. 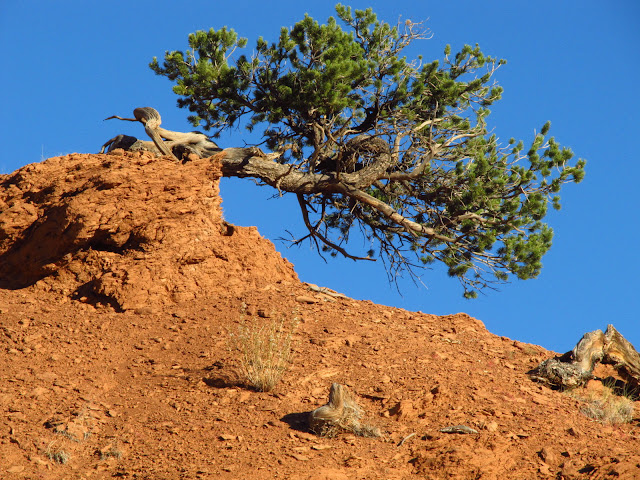 You know it isn't really a timeless place.  The clock keeps ticking; the modern world does intrude. 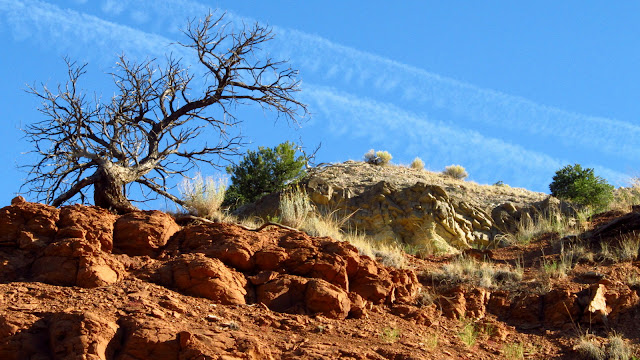 Poised as you are, though, between pointillistic details 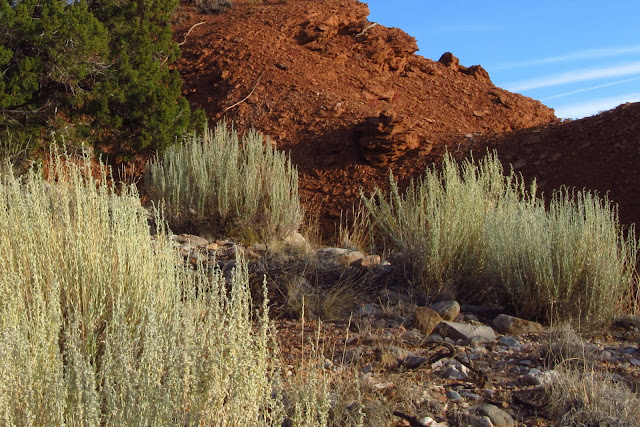 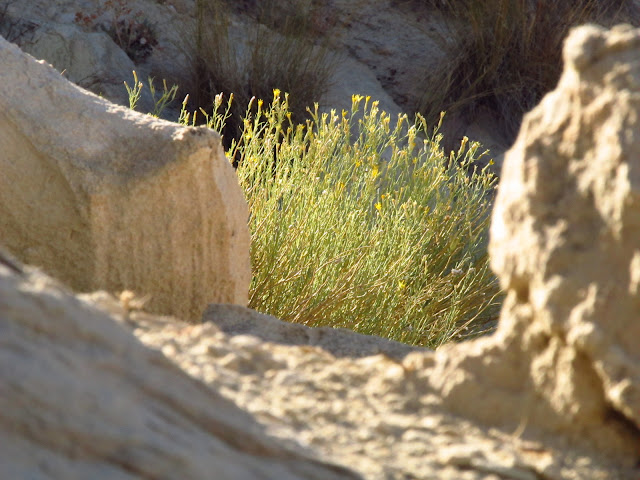 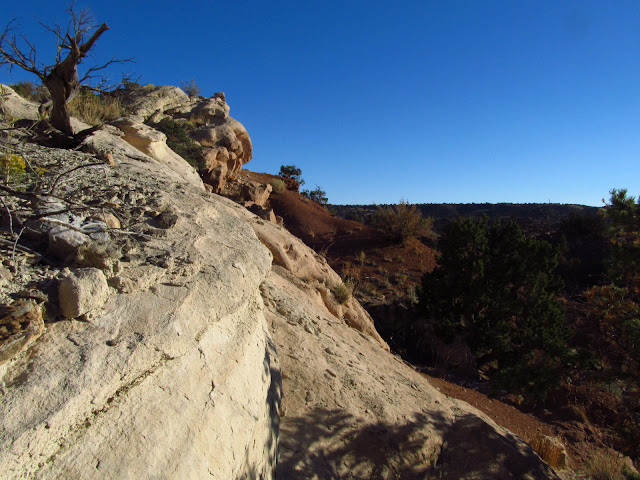 in that deep quiet, you find balance, and a peace that does seem timeless. 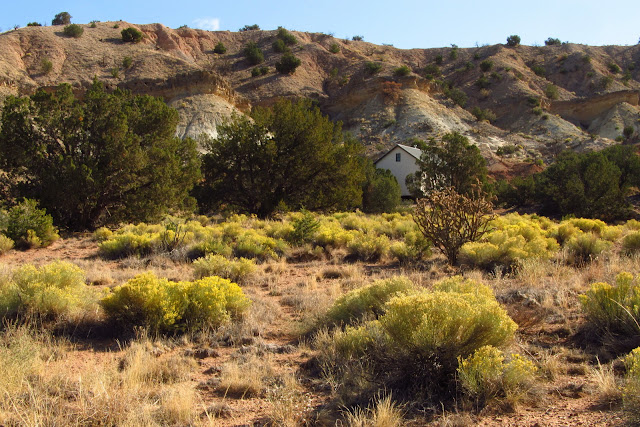 And you wish with all your heart, that for a few more days, time really could just stand still.

Stacy
Albuquerque, New Mexico, United States
I have an extra Adirondack chair, you know. Do have a seat. There's no better place for gazing at clouds, watching the grama grass grow, or enjoying the flowers. Or thinking. We can plot against the neighbor's cat. (Don't worry—it's plotting against us, too.)
If you'd like to contact me, you can reach me at stacy.microcosm@gmail.com.

Tips for Living with Chronic Illness